The Hunt For Treasure

When Will The Dark Depths Event Start?

As the Holo-Day Bash begins soon and The Raiders Collection event runs until late December, it is likely the Dark Depths event will begin after these conclude. Three events back to back is plenty of new content for Apex Legends players, so Respawn will need to pace them evenly.

What Is The Dark Depths Event?

The first details of the Dark Depths event emerged in November after reputable Apex Legends leaker GarretLeaks uncovered files for an event titled “Folklore”. As new patches are introduced to the game, this has presented leakers an opportunity to forage more information. The title “Dark Depths” became more official on December 5, as players were able to screenshot limited-time items within the Apex store.

If you’re a fiend for collecting elusive skins and flexing them on your opponents, then the Dark Depths event shouldn’t disappoint. It isn’t just Legends that are set to receive a makeover, as numerous weapons will get a new coat of paint too. Leaked skin names lend themselves to an Ocean theme, as they include: Barracuda, Sea Streak, Broseidon, and Barnacle Buster.

According to leaks so far, the following weapons will be receiving new skins, with a wealth of others surely set to join them:

As shown in the leaked image, Fuse, Lifeline, Ash, and Wraith are all lined up to get their fill of Legendary and Limited-edition skins. As most leaked information has been taken down recently, it is safe to assume that this event is real and Respawn is keen to keep plenty of surprises up its sleeve. 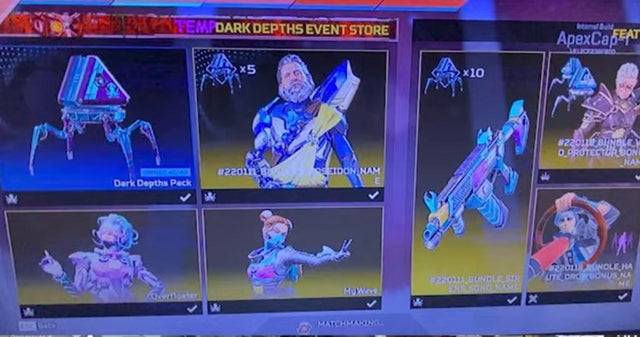